"Non-Euclidean calculus and quantum physics are enough to stretch any brain; and when one mixes them with folklore, and tries to trace a strange background of multi-dimensional reality behind the ghoulish hints of the Gothic tales and the wild whispers of the chimney-corner, one can hardly expect to be wholly free from mental tension."–H.P. Lovecraft, The Dreams in the Witch House

Are you one of the many players trying to stretch your brain around the mysteries of Arkham Horror: The Card Game? If so, you have most likely found yourself confronted by the strange, the unnatural, and the terrifying.

Of course, because the Arkham LCG® is part of the Arkham Horror Files, we expect it to come full of cultists, many-tentacled monsters, and Ancient Ones. And it doesn't disappoint. However, there's more to the game that tries our sanity than its myriad monsters and treacheries; we must also deal with the surprises thrown at us by a customizable card game that slips into the other realms—the realms of roleplaying and campaign experiences.

Because the core Arkham LCG experience is the campaign—rather than the standalone adventure—we've found ourselves confronted by weaknesses we need to overcome, by player cards that summon extra evils from the encounter deck, and by other cards that serve no apparent purpose other than to bait our curiosity.

Yet if we thought we were better prepared for the game's new dimensions and other worlds, we may have been surprised, once again, as we delved into The Dunwich Legacy. Right on the first page of the Campaign Guide (pdf, 835.4 KB), we found a section of additional rules. There were cards, it promised, that must be "exiled" from our campaigns after we play them. 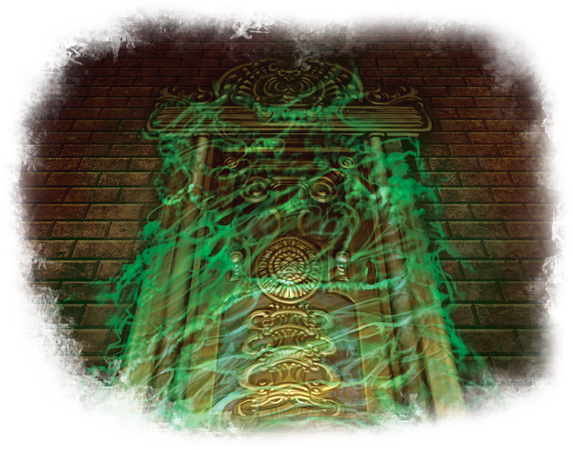 Gateways to Other Dimensions

Likely, if you have played a range of different customizable card games, you come to the Arkham LCG with a host of preconceptions—most of which are reasonable. You construct a deck, and you use it to defeat your opponents, whether those opponents are myriad cultists, monsters, or eldritch evils thrown at you by a scenario's encounter deck. Accordingly, it's reasonable to expect that all the cards you put in your deck are good for you. But we've already demonstrated that's not true in the Arkham LCG.

It's also wholly reasonable to expect that if you take the time to construct your deck piece by piece, you should get to use that deck as many times as you'd like. But again, this expectation doesn't hold among the mysteries, madness, and chaos of the Arkham LCG. 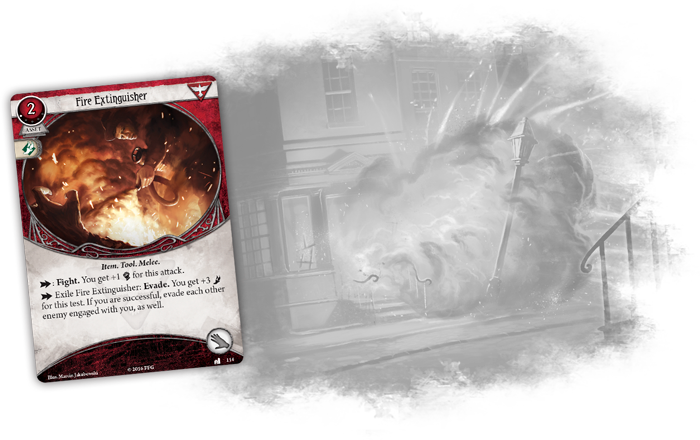 It's worth noting that both of these cards belong to the Survivor class. This is the class in which we find the everyday people who get sucked into the matters of the Mythos. They don't have any particular interest in exploring its secrets, nor any particular skills that qualify them to dig into its mysteries. But there they are, nonetheless, among monsters and madness, and they do the best they can to survive. Resourcefulness is key.

So we see these first two Exile cards not only as the introduction of a new mechanic, but as a deep dig into the game's flavor. Here are two tools for survival that just happen to have "single use" options.

You can use your Fire Extinguisher as a blunt weapon to increase your chances in a fight. Or you can empty the whole canister of spray to create such a diversion as will permit you to flee a deadly encounter before your enemies can react. But once you empty the canister, the Fire Extinguisher is spent, and you need to remove it from your deck.

Likewise, once you fire a Flare, it's spent, and you can't fire it again. However, there's still plenty of reason to consider including it in your deck. It provides you the option of two effects, and both are extremely powerful. You can either use your Flare to fight with a three-point bonus to your Combat ability and the potential to deal three damage in one action. Or you can search the top nine cards of any investigator's deck and put into play any single Ally card you find. 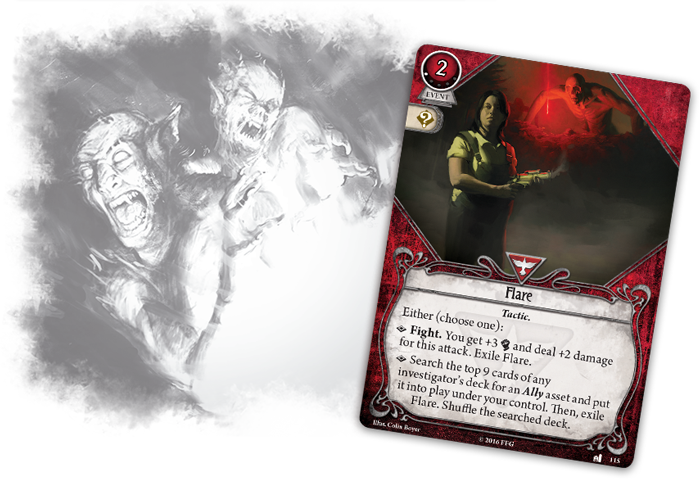 By Exiling your two-cost Flare, you stand a chance of scoring a first-turn Aquinnah (Core Set, 82) or Leo De Luca (Core Set, 48), dramatically increasing your odds of success throughout the rest of the adventure.

And this takes us to the heart of the matter. When you exile your Fire Extinguisher or your Flare, you're not just spending resources to play the card; you're spending experience. And this is something you don't do in any other customizable card game.

With the Arkham LCG and the Exile mechanic, you have the choice to invest in slower, stabler cards like Adaptable(The Miskatonic Museum, 110)—cards with values that increase steadily as you delve deeper into the mysteries of your campaign. Or you can invest in the punchy, powerful, single use effects like those of Fire Extinguisher and Flare. If you do, you may have to pay for them multiple times over the course of your campaign—or pursue other replacement cards—but these Exile cards may prove to be just the things you need to step through otherworldly portals and survive the challenges that await you…

Somewhere within the Miskatonic Museum, Olaus Wormius's Latin translation of the Necronomicon lies hidden away. Can you recover it before it falls into the hands of those who would make use of its most hideous secrets? First, you'll need to gain entrance to the Museum. Then you'll need to find the tome…