“Over fertile plains rolling down to the Skai he saw the smoke of cottage chimneys, and on every hand were the hedges and ploughed fields and thatched roofs of a peaceful land.”   –H.P. Lovecraft, The Dream-Quest of Unknown Kadath

After taking your first steps into the Dreamlands in The Dream-Eaters deluxe expansion, you find respite in an inn of this strange land, but your mind continues to be tormented by thoughts of those you left behind in the waking world and the dangers they may face there. Perhaps if you find the lost castle and return with proof of the Dreamlands, you can save yourself, your friends, and the other dreamers whose fate is still unknown. But if you wish to gain this proof, you must leave the relative safety of your hosts behind and step into the wild unknown of the Dreamlands. 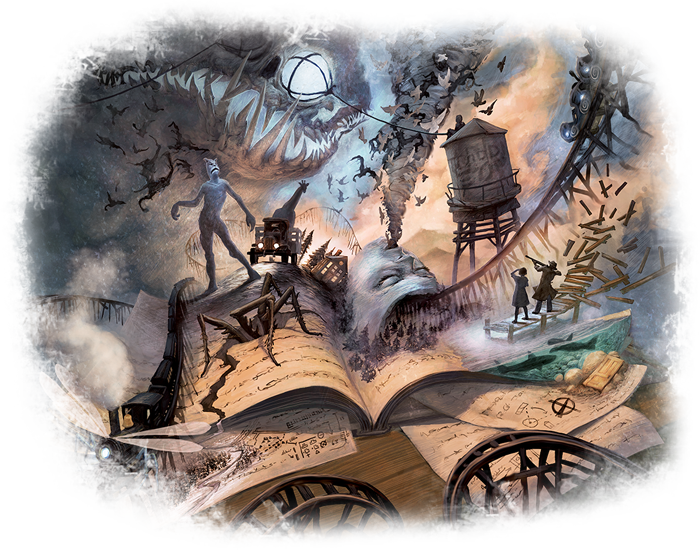 Journey Across the Dreamlands

Your mind twists with anxiety over the quest ahead, the warnings you received about danger in the waking world, and questions about the fate of the others who followed Virgil Gray down the steps of slumber and through the Enchanted Woods. Your only hope of saving everyone is to return with proof that the Dreamlands are indeed real, but if the rumors are true, only the castle of Kadath has the power to bring your discoveries into the waking world. So, despite the danger, you must set out on your quest and travel the vast world of the sleeping to find the lost castle where the gods dwell. 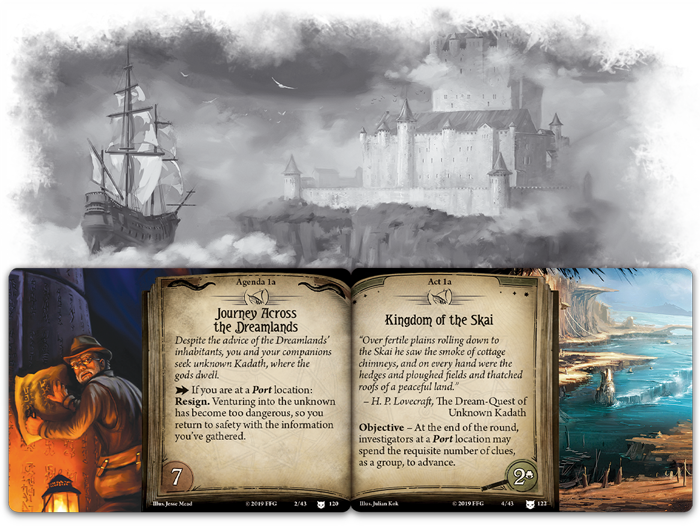 The Search for Kadath is Scenario 2–A of The Dream-Quest, and you can choose whether you'll play this scenario on its own or combine it with the other expansions in The Dream-Eaters cycle to form a larger four-part or eight-part campaign. Even alone, The Search for Kadath is an epic journey across the expansive Dreamlands. This realm is vast, and the designers of Arkham Horror: The Card Game have ensured that you will explore as much as could possibly fit in a single scenario. You will journey from shining cities and ancient ruins to forbidden lands veiled in mystery, all while battling monsters as strange as the Dreamlands themselves.

Not all secrets are readily revealed to you, however. Veiled locations contain unknown lore or assistance that must be sought before it can be of use to your investigators. If you can clear all clues from one of these locations, you'll be able to turn it over and uncover the secrets held within. It may take weeks, even months for you to cross this realm, but things like time and space are tricky subjects here. 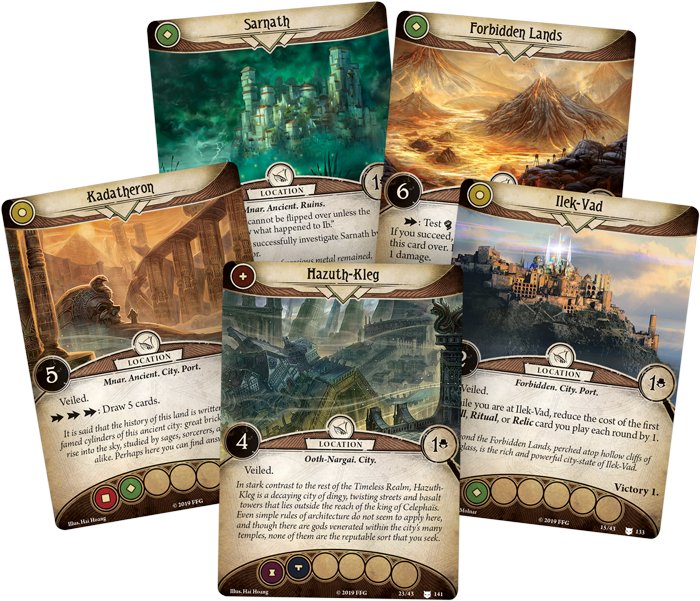 As your investigators become split between the worlds of the waking and the dreamers, you may find it more difficult than ever to communicate and work together across the divide. To help you with these challenges, The Search for Kadath provides a series of new investigator cards which may increase your ability to synergize with your team. For example, if you are fearful of the endless dangers ahead, you may wish to include a Scroll of Prophecies(The Search for Kadath, 116) in your pack. This Tome can help an investigator at your location confront any unforeseen challenge by drawing three cards, then discarding one card from their hand. 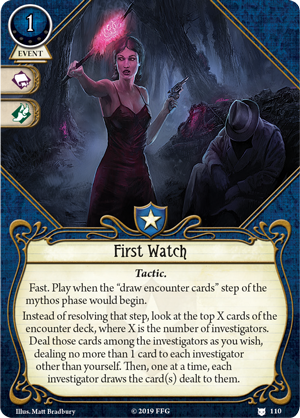 Meanwhile, if you take on the role of a Guardian, you can now lend aid to your fellow investigators by deciding to take First Watch (The Search for Kadath, 110). This Fast event is played when the investigators would draw encounter cards—instead of each investigator drawing a random terror from the deck, you may look at the top cards of the encounter deck and distribute the cards to each investigator as you wish. In addition, while each other investigator can only take one encounter card, this does offer you the chance to take on as many encounter cards yourself as you see fit. If one of your allies is struggling to escape or they're pushed to the brink of death and insanity, you can take their burden on yourself and protect them from the trials of the encounter deck.

Beyond working with the investigators of your team, this Mythos Pack also brings new faces into the fold to lend a helping hand, such as the new Ally, Jessica Hyde (The Search for Kadath, 118). While Jessica Hyde enters play half-dead with two damage on her, if you can keep her safe for a couple rounds, she will soon recover her strength with the tenacity that survivors are known for, recovering one damage each time your turn ends. No matter what the Dreamlands may throw at her, Hyde will continue to persevere, and so must you. The fate of your allies in the waking world depends on it.

Now that you have taken the first steps on your journey, the adventure of a lifetime stands before you. Discover the lost castle of Kadath, obtain the proof you seek, and return to the world of the waking before it’s too late!