“I am Daenerys Stormborn of House Targaryen, Queen of the Seven Kingdoms of Westeros.”   –Daenerys Targaryen, A Clash of Kings

The Seven Kingdoms of Westeros are split and divided by conflict—both on the open fields of battle and in the treacherous intrigues of court. For years, you’ve played out these epic power struggles on your tabletop in A Game of Thrones: The Board Game, and at Gen Con 2018, we announced the coming onslaught of House Targaryen with the Mother of Dragons expansion.

Soon, you’ll be able to bring your battles over Westeros to a perfectly arranged setting—Fantasy Flight Games is proud to announce the Mother of Dragons Deluxe Gamemat for A Game of Thrones: The Board Game, now available for pre-order at your local retailer or online through our website!

Across the Narrow Sea

Measuring 3’ by 3’, the Mother of Dragons Deluxe Gamemat displays the entirety of the Seven Kingdoms in all their glory, along with the western coast of Essos introduced in Mother of Dragons. From the harbor of Volantis to the snowy wastes of Castle Black, the world of A Song of Ice and Fire is lovingly rendered on this premium, slip-resistant gamemat. 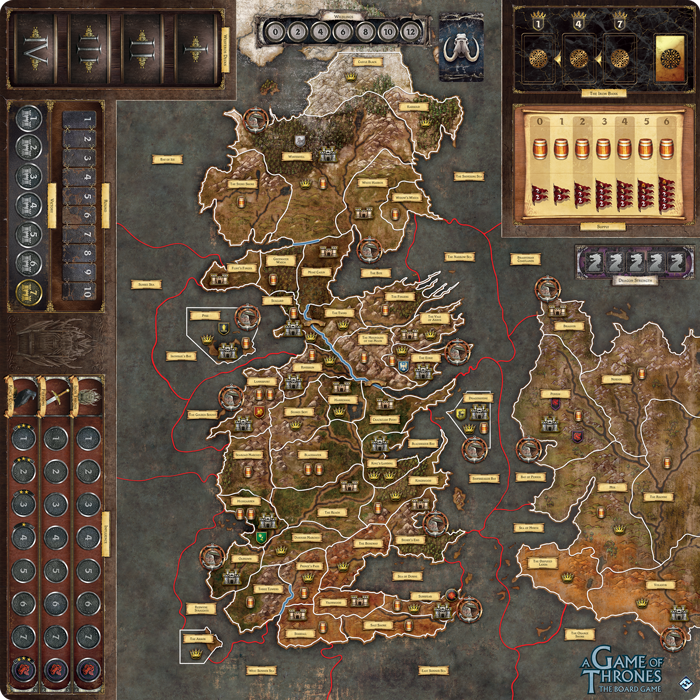 As you can see above, this deluxe gamemat is fully compatible with the upcoming Mother of Dragons expansion, seamlessly incorporating the continent of Essos, the dragon strength track, the Iron Bank of Braavos, House Arryn’s stronghold in the Eyrie, the fourth Westeros deck, and additions to the influence tracks—all printed onto a single thoughtfully arranged gamemat.

Whether you’re taking up arms with old allies like House Stark or House Lannister, or you’re making your bid for the Iron Throne with House Arryn and House Targaryen, the Mother of Dragons Deluxe Gamemat is an unmissable accessory for fans of A Game of Thrones: The Board Game.