Fantasy Flight Games is proud to announce the upcoming release of The Crossings of Poros, the sixth and final Adventure Pack in the Haradrim cycle for The Lord of the Rings: The Card Game!

For several of Middle-earth's heroes, the end to a long and difficult journey through Harad is nearly within sight. These heroes have survived a shipwreck and a desert crossing. They have tamed Mûmakil and allied themselves to a tribe of good-willed Haradrim. They have battled Orcs and Wargs. They have confronted Giant Spiders and wicked Southrons. And they have freed their friends from one of the Dark Lord's dungeons.

But now the friends they have freed are slowing them down. The heroes know the Orcs and Wargs will soon return—and in greater numbers. The Southrons will want their revenge. And there are still many miles to cross before they reach the safety of Gondor.

With its sixty cards (including a new hero and three copies of each new player card), The Crossings of Poroschallenges you and your heroes to find your way through the final stretches of Harad. Will you lead your company through the desert? Or will you ask them to weave their way through the rocky hills of the Ephel Dúath? Both paths bring their own dangers, and it falls to you to safeguard your heroes, their allies, and their hope for freedom. 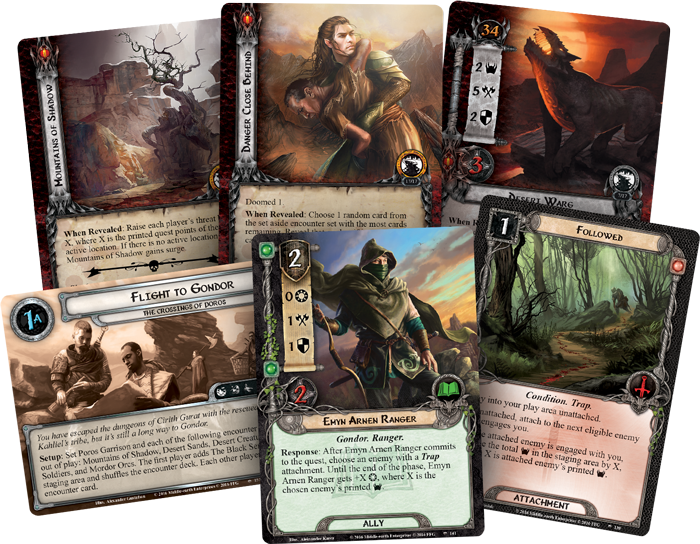 A Respite from Your Travels

Even as The Crossings of Poros leads you through the tense final legs of your journey from Harad to Ithilien, it celebrates some of the more unusual partnerships you'll find in The Lord of the Rings. An Ent hero is accompanied by a Hobbit ally. You'll find cards representing the vigilance of Gondor as well as that of the Beornings. And you'll find new ways to use your Traps among the spheres of both Lore and Tactics.

Rather than focusing too narrowly on a single theme, the hero and player cards from The Crossings of Poros conclude the Haradrim cycle by returning to the diverse range of different Traits and mechanics that were introduced in previous cycles giving them new support. These include the return of the Encounter keyword. Embodying one of the rarest and most powerful of all player mechanics, cards with Encounter keyword allow you to dilute the encounter deck, interrupting the tide of evil with beneficial effects.

There are three copies of the card, Wind from the Sea (The Crossings of Poros, 144), in the Adventure Pack, and each bears the Encounter keyword and an encounter card back. This card cannot be placed into your deck, but instead must be set aside at the beginning of the game. Then, if you draw and play a copy of Flight to the Sea (The Crossings of Poros, 140), you can shuffle a copy of Wind from the Sea into the encounter deck. 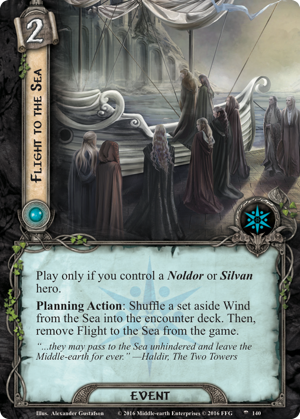 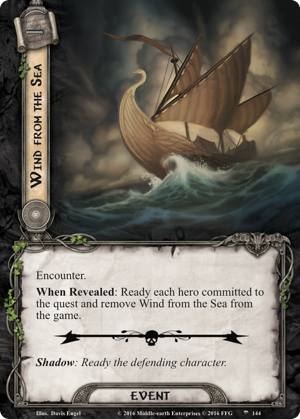 Of course, there's no telling when (or if!) you might reveal Wind from the Sea from the encounter deck, but if you do, it will turn the tide of the game in your favor. Not only will it refresh each hero committed to the quest, but it also negates one of the encounter deck’s reveals. And this is especially welcome in a scenario that's all about accumulating a mass of other, deadlier encounter cards.

The Hazards of Harad 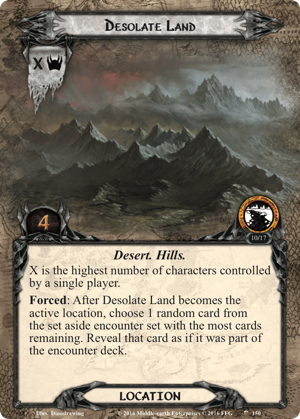 In this way, the encounter deck for The Crossings of Poros is always shifting from round to round and game to game, chasing after you and your heroes like Orc snifflers on a scent. It changes, too, when you set your course for one of the two different Stage 2 cards, shuffling its associated encounter set into the encounter deck and removing another from play. And then it solidifies its shape even more when you travel to one of the two different Stage 3 cards, again adding one encounter set and removing the other.

The result is that even though your heroes will want to complete The Crossings of Poros as quickly as possible and put Harad far behind them, the scenario is one that will reward you time and again with fresh challenges, decisions, and encounters.

Although Middle-earth's heroes could move faster on their own, they wouldn't be true heroes if they left their friends behind. It is because these heroes of Middle-earth commit themselves to the safety of their newfound allies that the final stages of their journey are so fraught with peril.

The question is whether the heroes' decision will bring new strength to Gondor—and new insight into the Dark Lord's methods—or if it will lead to their downfall along the road. You'll have your chance to determine the fate of these noble heroes when The Crossings of Poros brings a thrilling conclusion to the Haradrim cycle in the second quarter of 2017!