Shards from the realm of Everdark are piercing the hearts of even the best men, turning allies into enemies with astonishing speed. The darkness within is overtaking the unsuspecting villagers, and only you can save them from their ominous fate. As you scramble to rescue the locals, you’ll face horrors imbued with the strength and power of Everdark, but you must beware! Nobody is safe from the icy chill of all-consuming darkness, not even the heroes who seek to stop it.

Shards of Everdark includes thirteen detailed plastic figures—four heroes, two ice wyrms, five shades, and two dark minotaurs. These heroes, like those of previous expansions, hail from the first edition of Descent, along with two familiar monsters and one brand-new beast: the dark minotaurs. Bring Arvel Worldwalker, One Fist, Karnon, or Steelhorns into your team to embark on new adventures. You’ll also prepare for battle in two new quests, which challenge you to stop the spread of the corrupting shards and destroy the armies of Everdark once and for all.

The Fury of One Fist

Making a triumphant return to your games of Descent is the daring and tenacious One Fist. His fabled story is shrouded in mystery, but after losing one of his hands, One Fist took on his new name and embraced the life of a fearless warrior. Some may underestimate the one-handed hero, but this unique trait and his uncontrollable fury make him an powerful warrior.

The loss of a hand might have broken his spirit, but instead One Fist discovered newfound strength in his loss. His missing hand was replaced with a hook, which he uses with uncanny precision and vigor in combat. The added danger of his hook-hand gives One Fist the ability to focus his strength by rolling an additional yellow power die on melee attacks, provided he wields a one-handed weapon. One Fist’s impressive strength makes him an obvious choice for dedicated melee players and a surprising threat to the overlord player. 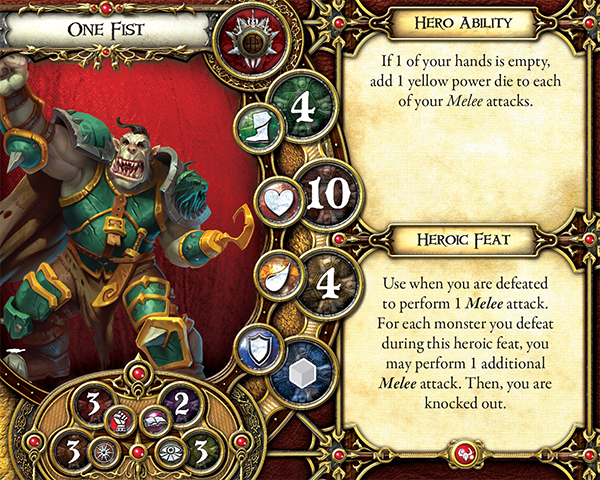 One Fist’s lost hand gives him a fury and a passion for vengeance that drive his desire to rid the world of evil. His rage and adrenaline deliver a raw power which translates into exceptional resilience. If being knocked out seems inevitable for One Fist, you may trigger his heroic feat to go out in a blaze of glory—making an unlimited number of melee attacks, provided he continues to defeat a new monster with each attack. At the end of this flurry of attacks, One Fist is knocked out, but you can certainly make an impact first, whether you choose to throw him into a throng of weaker foes or move him toward your more intimidating opponents.

Many old and familiar monsters seek to impede upon the hero’s efforts in the Shards of Everdark expansion, but the Everdark realm has also inspired a new herd of creatures to join the fight. For the first time in Descent, the dark minotaurs abandon their preferred solitary existence in startling numbers, offering the overlord player their newfound passion for darkness and a bounty of daunting skills. Their hulking frame and twisted magic give them overwhelming strength and power, making them the ideal champions of Everdark.

Shades and ice wyrms have their own petrifying powers, but the minotaurs’ sheer size makes them particularly valuable. Should the heroes get close enough, a minotaur can charge and perform an attack with startling power by gaining the use of an extra red die on top of its standard red and blue dice. Not only are they brutal, but a minotaur’s attacks are nearly impossible to block. If a minotaur spends a surge, its attack gains exceptional precision and force, piercing a hero’s armor and flesh alike. 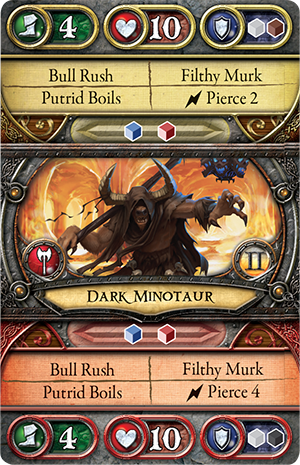 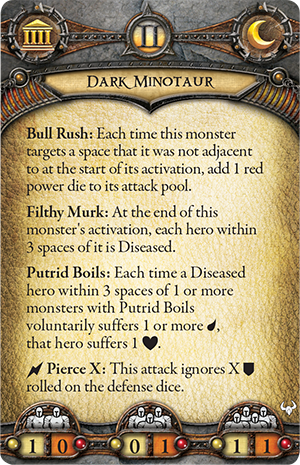 Few manage to survive a dark minotaur’s initial assault, but if they do, their woes will only increase. Dark minotaurs have the ability to inflict disease on any heroes still within three spaces at the end of their turn. If that weren’t bad enough, if a hero chooses to suffer fatigue while still in range of the minotaur’s power, the plague also claims a measure of health. Between their ability to bull rush a hero and their tendency to cause persistent damage through contagion, dark minotaurs are most effectively taken down swiftly and from afar, though their high health makes this endeavor tricky for any hero!

Bring legendary heroes and infamous monsters to your Descent: Journeys in the Dark game with the Shards of Everdark expansion. Explore the unique strengths and abilities of these new characters by playing the included quests individually or use Rumor cards to introduce them to other campaigns as side quests. Lead One Fist and his allies to save the world from Everdark’s evil—or spread the corruption of the Everdark across all Terrinoth as the overlord player!