"All the other corporations, they have lost sight. They forgot how New Angeles functions, afraid to dirty their hands to learn."–Yuri Talunik, Melange Mining 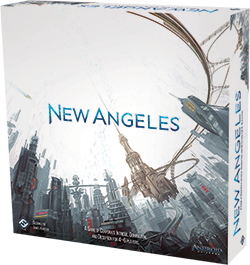 New Angeles is a board game of corporate greed and machinations for four to six players set in the Android universe.

You and your friends each take the reins of a powerful megacorporation. You cut deals and forge temporary alliances to gain leverage and financial superiority over your corporate rivals. All the while, you need to keep a finger on the pulse of the city.

You can't let unrest lead to orgcrime and outages. So even as you pursue your profits and diversify your assets, you may also need to keep the little people happy. Happy people make productive workers, and you want to keep the thriving megalopolis of New Angeles good for business.

In Pursuit of Profit

Money is everything. As one of the largest megacorps in New Angeles, you have two goals:

Everything you do over the course of the game plays into these goals. All the talent acquisition. All the asset management. All the negotiations. All the ways that you throw your support behind other corps and their initiatives. All the work to suppress Human First activists and orgcrime. All the medical research. They're all directed toward your company's short-term and long-term growth. 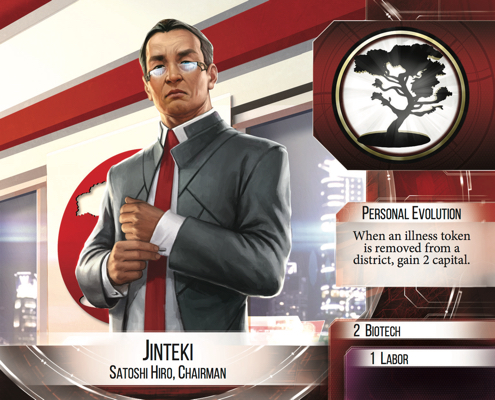 And that growth plays directly into your win condition. At the beginning of the game, after you and your friends determine which corps you'll represent, you shuffle together a deck of rival cards. This deck includes one card for each of the corps you and your friends are representing in the game, plus a card for the Federalist. To win, you simply need to amass more capital over the course of the game than your rival… unless you're the Federalist. 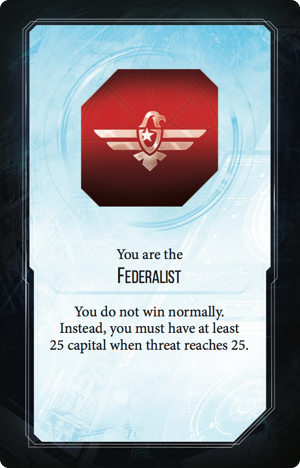 Unlike the other corps, the Federalist does not win by collecting more credits than its rival. The Federalist wins by spurring New Angeles toward the sort of chaos, rioting, violence, and bloodshed that may force the U.S. government to intercede.

Why does the Federalist want the U.S. government mucking about in New Angeles? It's unclear. Perhaps the Federalist corp believes that a new, more heavily regulated business environment will benefit its future endeavors. Perhaps it's negotiated (read: bribed) itself into some very lucrative terms with the feds. But the reason doesn't really matter. What matters is that this contrarian agenda silently pits the Federalist against all the other players.

Each round, while the other players seek to meet the demands of New Angeles' inhabitants, lulling them back into a productive and profitable quiescence, the Federalist secretly works to sabotage the efforts. If the corps fail to meet demand, the city's threat rises. If the city's threat rises to twenty-five, the U.S. government intercedes. If the U.S. government intercedes, the Federalist wins, and all the other corps lose.

Making profit, pleasing the people, keeping the feds at bay—it all comes down to the decisions you make in the board room. Each round, you and your friends take turns pitching different business deals that will (arguably) benefit the city and keep business running smoothly. But these deals can also help you get a leg up on your competition. And if you successfully convince the other corps to back your new offering, you can claim any asset that happens to be up for grabs. 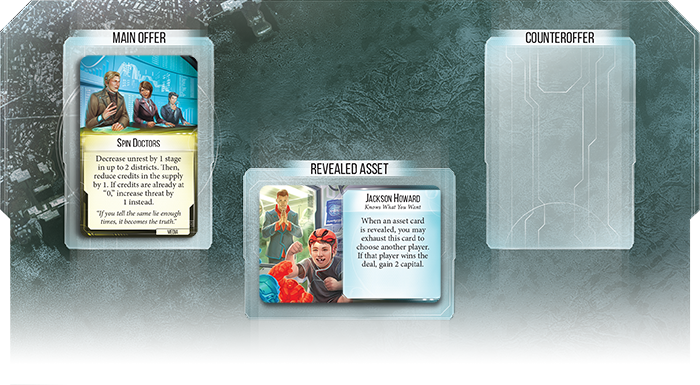 On the NBN player's turn, Jackson Howard is revealed as the new asset, and NBN offers to put their Spin Doctors to work to decrease the city's unrest. 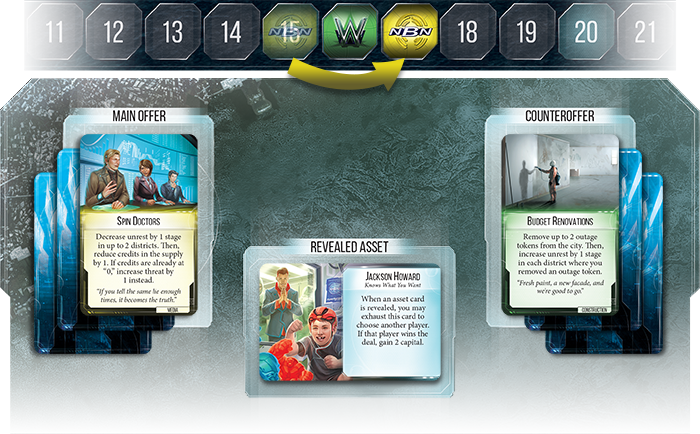 After the Weyland Consortium responds to NBN's offer by countering with Budget Renovations, the other corps divide their support. The active player's offer wins the tie, so NBN claims Jackson Howard and uses their Spin Doctors to reduce unrest by one stage in two districts.

As you might expect, these negotiations can lead to all sorts of wheeling and dealing, quid pro quo offers, fearmongering, coercion, manipulation, and other good business tactics. You can let an allied corp decide how to resolve your offer. You can give a corp some of your capital in order to secure its support. Or you can betray the corp that just gave you its capital in order to secure your support. The result is that New Angeles is played only partially with its cards and board and textual abilities, and then the rest is played between the players.

New Angeles is not only the largest, richest, and most diverse city on Earth. It's also a uniquely fertile base for the worlds' most powerful megacorps and their business endeavors.