“It is not well that earth’s gods leave their thrones for the spider to spin on, and their realm for the Others to sway in the dark manner of Others. Fain would the powers from outside bring chaos and horror to you, Randolph Carter, who are the cause of their upsetting, but that they know it is by you alone that the gods may be sent back to their world.”   –H.P. Lovecraft, The Dream-Quest of Unknown Kadath

The end is nigh.

Ever since occult author Virgil Gray first shared tales of his adventures in the Dreamlands, your world has turned upside down. You have made your way into these mysterious lands, witnessed their incredible beauty and their terrible dangers, and now you will finally face the horror that has been behind the bridge that has made your travels possible, if only as a side effect of their greater schemes. 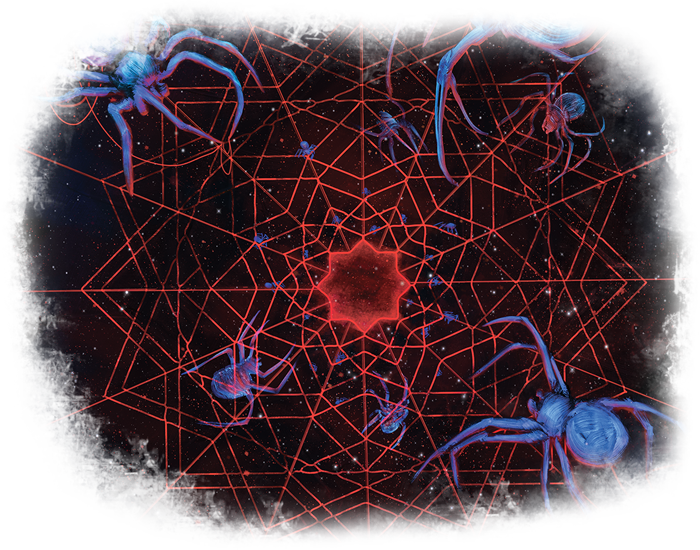 The Bridge of Webs

Weaver of the Cosmos is Scenario 4–B of The Web of Dreams campaign for Arkham Horror: The Card Game. This scenario can be played on its own in Standalone Mode or combined with the other expansions in The Dream- Eaters cycle to form a larger four-part or eight-part campaign.

After the events of Point of No Return, you have finally reached a perilous nightmarescape, the bridge between realities that you have been led to since the very beginning. Everything has led to this—Virgil’s writings, your companions’ unending sleep, the black cat, all of it. This transdimensional space is home to a spider creature that would obliterate your world and replace it with a new reality. If you cannot stop it, there will be no Earth left to return to, no escape from this hellish dream, and the Dreamlands will be lost as well. You have no choice but to fight. 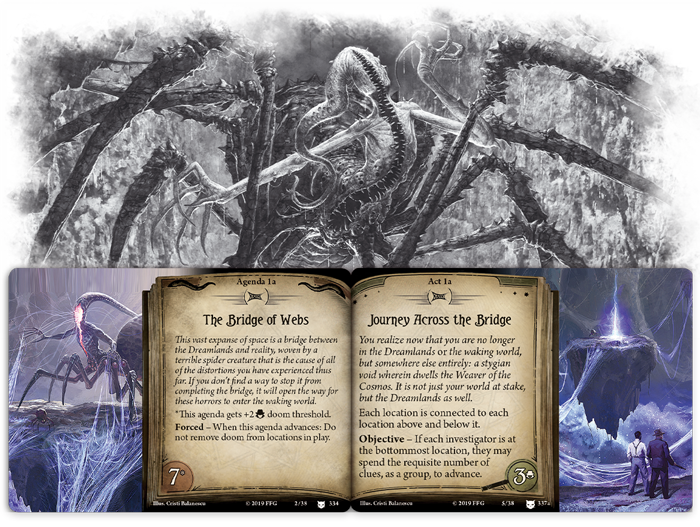 You have faced enormous, terrifying opponents in the past, but none with the scope of this weaver between worlds. Atlach-Nacha is massive is every sense of the word, built from multiple cards and standing separate from each location in this scenario. This Outer God’s form is comprised of multiple Legs of Attach-Nacha (Weaver of the Cosmos, 347) enemies. Each of these enemies operates as a separate enemy with the massive keyword and is considered to be engaged with each investigator at its location, like most massive enemies. Each leg is considered to be at the location its corner is physically bordering. 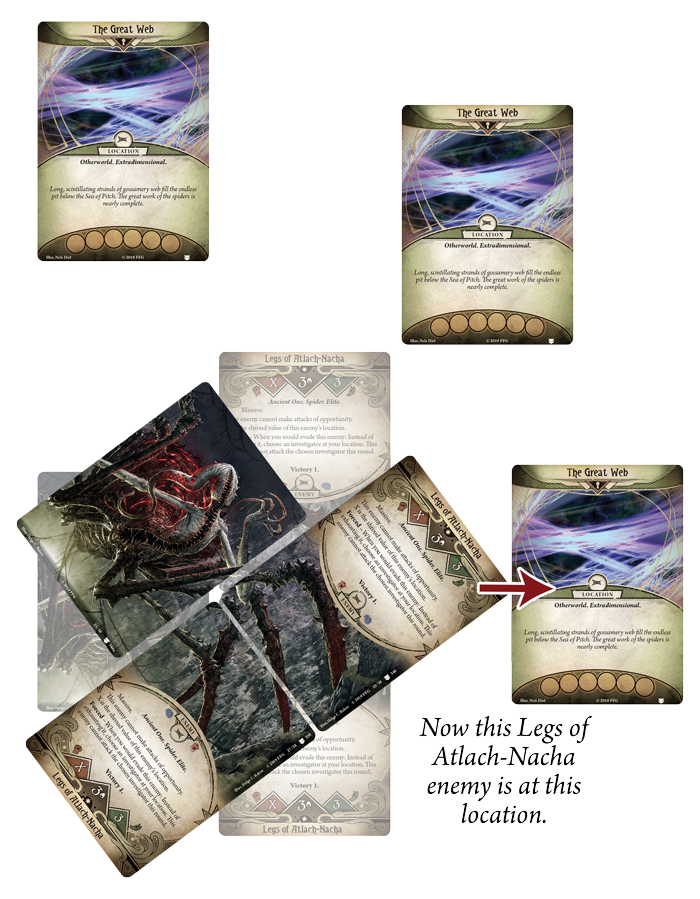 As Atlach-Nacha spins, the Legs of Atlach-Nacha enemy moves one location clockwise and is no longer engaged with investigators at its former location. 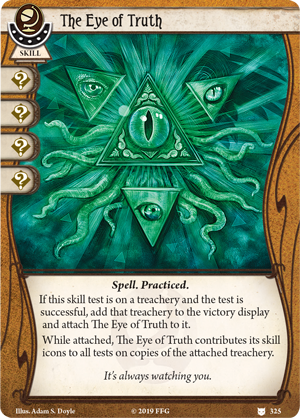 Here at the bridge where all you know may end, you will find new implements to aide you in your battle against the Spinner in Darkness. Even in the blackest nightmare, where the line between reality and fiction has blurred, The Eye of Truth (Weaver of the Cosmos, 325) sees all. With a hefty price of five experience to add to your investigator deck, this Spell is well worth the cost for any Seeker. If you commit this skill and its four wild icons to a test on a treachery card and the test is successful, you add that treachery to the victory display with The Eye of Truth attached to it. As long as The Eye of Truth remains attached to that card, it contributes its skill icons to all tests on copies of the attached treachery, which can prove nearly priceless no matter which campaign you play through. Imagine, nearly guaranteeing that you will never have to deal with the effects of   Centuries of Secrets (The Circle Undone, 99) or   Curse of Yig (The Forgotten Age, 85) for an entire scenario!

But while mystic spells and eldritch rites have their place, sometimes you just can’t beat the classics. In this Mythos Pack, Rogues gain access to their own level-five player card, the Sawed-off Shotgun (Weaver of the Cosmos, 327). As an action, you may spend one of your two ammo to deal 1 damage for each point you succeed by during a fight. As long as you pass, you will deal a minimum of 1 damage, with the chance to deal a maximum of 6! Now, with this raw firepower there is also a certain amount of risk. If you fail during your combat test and damage another investigator, you deal them one damage for each point you fail by, with the same minimum and maximum. In a worst-case scenario, you could kill many more delicate allies from Rex Murphy (The Dunwich Legacy, 2) to Agnes Baker (Core Set, 4) or Ashcan Pete (The Path to Carcosa, 5) in a single ill-fated blow. But while the risk to your friends’ live is certainly a point of consideration, you’ve all known that you may not make it back and the fate of two worlds is worth more than any of your own lives. You may be face to face with a god, but if it bleeds, you can kill it.

Atlach-Nacha sees this as a new beginning, but it comes at the cost of everything you know and love. The comforts of Arkham, the wonders of the Dreamlands, it could all vanish into the web of a single god’s schemes. The price is far too high to pay—you must stop them before it’s too late!